The Life Science Innovation Northwest (LSINW16) conference made clear that Seattle now vies with Boston, Raleigh-Durham and San Francisco-Oakland for the top US cities for Life Science innovation. It’s clear that Seattle leader in life sciences is made possible by an incredible culture of strategic, industry-research partnerships backed by big dollar investment.

The Bill and Melinda Gates Foundation has the highest profile globally, serving as a catalyst for billion-dollar global vaccination and treatment programs. Gate Foundation Venture Capital’s whip smart Charlotte Hubbert was on hand to talk about their direct investment strategy and to receive a nod from the LSINW Women in Life Science Award.
The Seattle Children’s Research Institute (SCRI) is now among the top 5 pediatric research hospitals in the US. Dr. Elizabeth Aylward was on hand to discuss industry partnerships for their researchers. SCRI attracts hundreds of millions in research—much of it for clinical trials of pharmaceutical treatments previously untested for kids.
The University of Washington and the Fred Hutchinson Cancer Research Centre (AKA FredHutch) also have a sophisticated approach to cultivating research-industry partnerships. On the venture side, dozens of VC funders and pharmaceutical company strategic investors were there to find the next Seattle Genetics. Some of the novel ventures spun off from these partnership, have grown into textbook success stories:
Juno Therapeutics founded in 2013, which has raised almost $700 million, and forged a 10 year partnership with Celgene, valued at $1 billion to commercialize a new cancer treatment that uses T-Cells to attack cancer cells.
The Infectious Disease Research Institute, known as IDRI which has trialed tuberculosis, leishmaniasis and pandemic flu vaccines. IDRI is home to the Global Health Vaccine Center of Innovation, a Sanofi Pasteur partnership. Sanofi Pasteur and the Gates Foundation hope that the partnership will speed up vaccine development, innovation and distribution, particularly in the face of rapid, emergent infectious diseases. 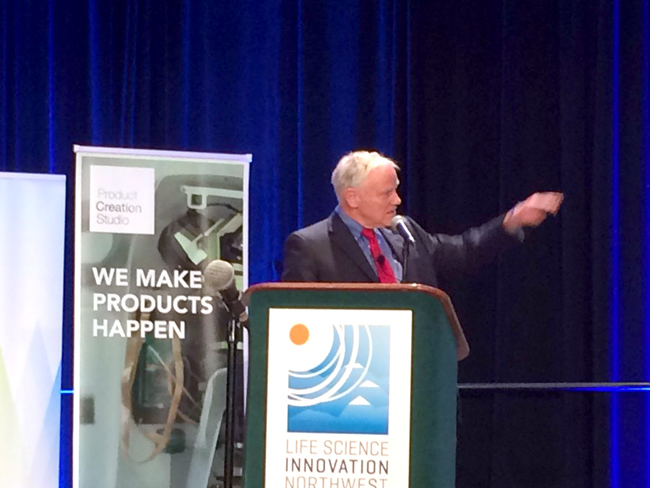 The Life Science Innovation Northwest (LSINW16) conference’s focus on big investment for big ideas was perhaps best captured by the keynote by Dr. Leroy (Lee) Hood. who took us through his six paradigm shifts in life sciences.

1. Biological Engineering: In the early 1970’s he witnessed first hand the effects from taking an engineering perspective and applying it to biology.
2. Human Genome Project: Perhaps the work Hood is best known for was his role as part of the original group of 12 pioneering scientists who—with deeply conflicting perspectives—explored sequencing the entire human genome. As Hood remembers it, the decision to proceed was 6 for and 6 against. It cost nearly $3Billion to sequence the first human genome, but Hood feels that within the next 6–8 years, the cost to will drop to $100 and “it will become part of every hospital admission.” This transformative moment paved the way for gene therapies that have proved exceptionally profitable to the life sciences industry. Incredibly innovative companies were created—including Genentech in 1976. Genentech has a fascinating origin story in its own right.
3. Interdisciplinary Biology: Hood saw great leaps once disciplines such as physics and computing started collaborating. The borders of thought broke open and entire new disciplines were forged, such as computational biology, biophysics. This cross-disciplinary culture fostered new areas of research as new technology drove the analytical tools that revolutionized biology.
4. Systems Biology: In the 1990’s Hood pioneered a systems biology model, where our bodies and environments formed a network of networks. The the components of each network (including genetic, molecular, cellular, organ networks) interconnect and change over time. At this time Hood led the Institute for Systems Biology in Seattle, stimulating research in genomics, metabolomics and proteomics.
5. Systems Medicine: A natural evolution of Systems Biology was the application of new systems thinking to disease, as genome sequencing led to new insights of health and disease. Although Hood was careful to remind us that our “genome does not determine destiny”. He summarized this convergence of biology, medicine, big data and consumer-driven health as P4 Medicine—a new medical paradigm that is Predictive, Preventive, Personalized and Participatory. 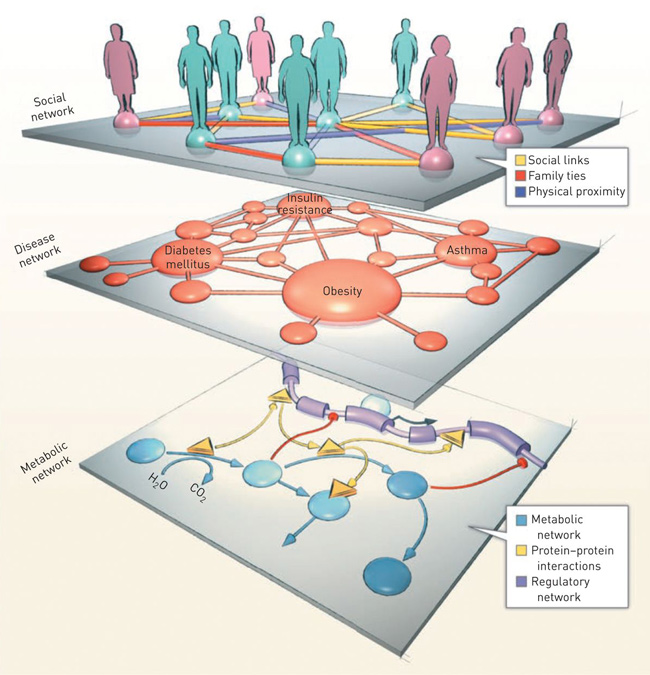 6. Scientific Wellness: Hood then helped co-found Seattle startup Arivale when he recognized that the behavioural elements—the social network, or human context of wellness was critical to prevention, and sustaining health. Each individual is now associated with a cloud of billions of data points that is becoming actionable, so that disease will be anticipated far earlier. We will see in real time the very earliest changes that signal transition from health to disease and act. How do we educate people and shift the medical care model to create a truly participatory model?

Are you a Life Science innovator?
Find out how Ayogo is contributing to pharma and medtech patient support programs.