An open beta of Monster Manor began in the UK and Ireland on October 15, 2013!  We’re giving 100 families with at least one child who has type 1 diabetes the opportunity to take part.
What is Monster Manor? A game for Apple & Android phones/tablets/iPods that helps get kids tracking their blood glucose by adding a bit of fun to the challenge. Every time a player checks and logs their blood glucose they are rewarded with gameplay where they can unlock crazy monsters, bizarre furniture and weird pets. 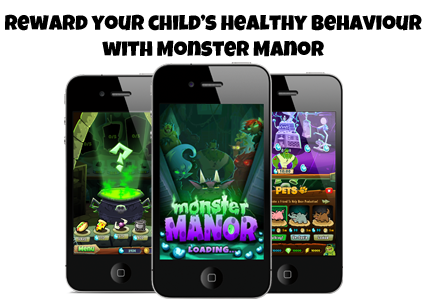 Why take part? You’ll get a chance to be one of the first families to play Monster Manor. You’ll help us show the positive benefits of Monster Manor to all families who could use some support.

Mimi Astle is 10 years old and has had Type 1 diabetes since infancy.  She is one of the 100 children signed up to participate in the Monster Manor Pilot Study being led by the Oxford AHSN, launched October 15.
Monster Manor was created to respond to the concern expressed by many parents of children with Type 1 diabetes. “Ensuring that children do their blood glucose checks can be difficult. It can be so easy for them to become demoralized or not care about doing their blood glucose checks” said Mimi’s mother, Annabel. “The Monster Manor app is a really good way for her to look at and monitor how she’s doing in a very simple and fun way and promote her to check her blood glucose levels.”
“The more blood glucose checks that you do, the more points you earn which means you do better in the game.”
“In the long-run, I hope that the game will help her take ownership of her diabetes for when she is older.”
With the launch of Monster Manor now available to families in the UK and Ireland, we are delighted to see in initial play results a strong positive effect—that the longer children play Monster Manor the more they log their blood sugar.
Ayogo was invited to participate in the OCDEM Launch event. Click here to view:
1) Opening comments from Ayogo’s Michael Fergusson and Adrian Estergaard
2) The video by Oxford AHSN

Could your child use a little boost  in becoming more independent managing their diabetes?  Perhaps he or she struggles with testing and logging?  We all know that managing diabetes is HARD! If you or someone you know could use some help, let them know about the Monster Manor open beta.

Get enrolled in three easy steps:
1. Click here to sign up for the Monster Manor UK Pilot Study.
2. Check your email for a brief parent survey before your child dives into the game this October.
3. Play and be well!

Ayogo is delighted to be teaming up with Sanofi UK, Oxford Academic Health Science Network and Diabetes UK in offering the Monster Manor UK Beta and Pilot Project.